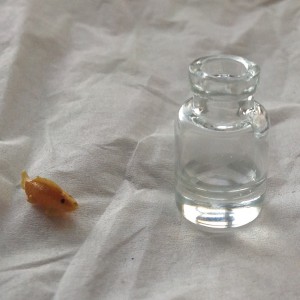 For my birthday this year, one of the places I went was a miniature house shop. That’s where I got the tiny bottle pictured above. They had fliers announcing the annual miniature show in town a month later. Since I have an alarming fondness for very tiny things, I went to that too.

A kind lady gave me a little cup of the tiny koi she makes by hand. She doesn’t actually sell them; they’re just her supplies for making other things. It was a very exciting gift. So I thought I would combine the two. 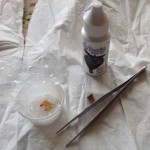 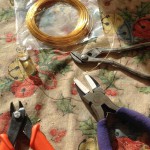 I used a one-part resin to fill the bottle and give the koi the “water” it’s suspended in. The air bubbles were intentional, though it took some work to figure out how to introduce them properly. Then I made a bail with some gold wire.

It’s the first time I’ve done jewelry work since moving. Apart from having to actually dig out all my supplies, I discovered that my hands have lost some of their “working with fiddly things” muscle tone. It took a long time to wrap the wire, because my hands kept cramping. 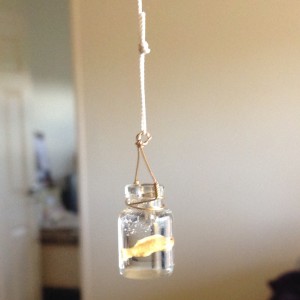 This first one is hanging as a decoration, because I don’t really need more necklaces. I’m considering turning two of the others into a set of earrings, though. (Not that I really need more of those, either.)

The real problem is going to be when I run out of tiny koi and can’t get more. Should my next craft skill be clay modelling?