Yesterday was my 30th birthday. (More on that later, probably.) To celebrate, Mum and I went to the Pismo Beach monarch butterfly grove.

I enjoyed taking a ludicrous number of photos: well over 100 shots. (Not counting the full roll of film Mum took as well; gotta wait to have that developed.) A lot of them turned out mediocre. I don’t have a long lens for my camera, so it just flat couldn’t get close enough at times. Also I, uh, forgot to switch to the action setting when I really could have used it, so I’ve got some lovely blurs of butterflies in flight.

Here are a few of the best shots! (Click to embiggen.) 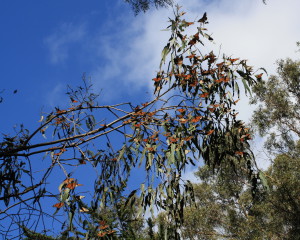 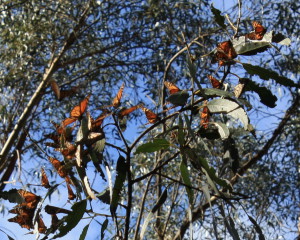 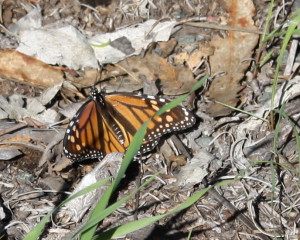 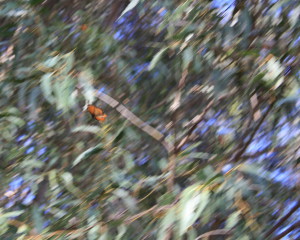 Over on LiveJournal, ysabetwordsmith is doing her monthly poetry fishbowl. The theme this month is unexpected uses for ordinary things. You can leave prompts and donate to unlock the poems. (There’s still a little time left!) There’s also a freebie up.

Over on the Dreamwidth mirror, I left the following prompt:

If you stay alive long enough, everything ends up being useful at some point. Packrats and people with a knack for anticipating future usefulness, hanging on to seemingly useless objects until the critical moment. I would particularly love to see this in the Frankenstein’s Family verse, but anywhere would be lovely.

Which turned into the poem “Life Is an Improvisation,” so if you feel like tossing a few coins to the bard to help unlock it for everyone, I’ll be extra happy!

For a full explanation of the fishbowl concept, see Ysabet’s post. The short version is indie publishing at its best: readers want stuff, writers make it, money (or linkbacks like this post) support the writer so they post the materials.

This video from The Mary Sue gets into some of the reasons why I adore Miyazaki and Studio Ghibli’s films. In particular, the way their films handle villains is something I both love to watch and struggle to emulate in my own stories.

A good villain is hard to make, and the nuanced characters who need to be outsmarted and won over, rather than killed, have become my (often out of reach) ideal.

I’ve been listening to these readings of fragments from the Epic of Gilgamesh. I enjoy listening to mellow recordings while going to sleep. (It’s the best solution I’ve found for my insomnia.) These were pretty pleasant last night. I haven’t listening to any of the other hymns and poems yet.

What I love most is that transcripts and translations are provided with most of the recordings. Putting meaning, sound, and visual together at once makes for a more engaging experience. Of course, that’s not exactly the best trait in something meant to put me to sleep!

Yeah, okay, starting this up against might be a New Year’s resolution type thing. Just a little. :D

The last couple months of 2015 really knocked me on my ass. I’ll be posting about it a bit, but I also don’t want to dwell too much. My goal right now is to build up a new routine, for my somewhat-new life, that lets me get back to what I love while also…you know…eating.

At the moment, that means engaging with life as usual at home. With a couple light storms behind us and a big one coming this week, priority one was disking the property. Not my department personally–Mum’s run the tractor around nearly all the areas. The exciting thing about that, though, is it also means the fields will be ready for planting soon.

I planted daffodil bulbs today, but I’ve still got the second half to put in another spot. We’re trying to get up some money to order wildflower seeds for the main field. Last year’s sunflowers were something of a disappointment, so I’m keen to give something else a chance. The small front field is going to get squash and vegetables again. The real challenge: finding more tactics to use against the recurring pest problems. Bloody gophers and ground squirrels, eating my pumpkins!

Though the rain has brought up green everywhere, it’s also been very cold. It’s still solidly winter. My gardening plans are a little bit wishful thinking and a little bit groundwork for later. Being busy feels good, though, after a couple months dominated by anxious waiting.

The Brewer’s and Red-Winged blackbirds have been out in force. As are the two sparrow groups I haven’t identified confidently yet. They all like to pick through the horses’ grain, so the winter scarcity hasn’t deterred them. The collared doves have been less active than usual; I hadn’t noticed at first that they haven’t been wandering around noisily. I’m still waiting for the grackles to return. I’ve seen a few in the past couple months, but no regular presence.