I played the most boring game of Bingo today with the DMV. Now serving. B-zero-three-point-one-four at. The forbidden window. Two and a half hours for a two and a half minute license renewal. The one interesting bit is this: for the first time since getting my learner’s permit, nearly half my lifetime ago, I had my picture taken again. I decided to really look at that old photo before it goes away. 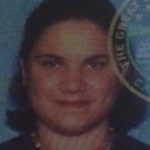 I come from a family of people with wavy, frequently short hair. My hair, left to its own devices, curls into tight little ringlets ready to strangle passers-by. With no one to guide me, it took until adulthood for me to learn how to take care of curly hair. So Joyce at fifteen had some problems in the this department.

This was about a year after hacking all my hair off for the second time. (I grew it out when I decided I wasn’t going to crossdress any more. I miss passing as a boy, but I would do the hair very differently now.) Now at that agonizingly awkward length between chin and shoulder, I insisted on pulling the top back, because then it would dry straighter. I hated my curls. They just turned to frizz and got everywhere.

Oh, Joyce, sweetheart, you’ll learn. You don’t have to hold so tight all the time to keep things under control. Also, next time you dye your hair, go for a brighter red. Better yet, go for orange. Subtlety is overrated.

If you tell me to smile, I probably already think I am. I have trouble gauging my facial expressions, and “normal” ones don’t come naturally. I taught myself to make faces other people could recognize, which means they tend to be exaggerated. You get nothing or everything. At fifteen, I seldom felt happy enough to show off my Cheshire grin. So this was what I produced when ordered to smile: an awkward, tight-lipped expression that has more in common with a grimace than anything else. That is not a pleased face.

When I get my new license and see the photo, I hope I won’t look like I’m smiling at all to anyone else. I coached myself in the bathroom and car rearview mirrors before going to the DMV. I wanted to get my real smile, the one no one else looked close enough to see for all those years. The slight tilt at the corners, the opening of the eyes, the way even my ears pull up and back to show it. I hope, in the new photo, I see myself.

Joyce, my darling, you’ll learn. You have your own way of doing things. You don’t have to pretend. There will be people who see all the same.

Oh, the spiked collar. At fifteen, I wore layers, I wrapped my hands in cords and charms, and I wore a spiked collar for maximum “don’t touch me” vibes. You can’t tell in the picture, but I’ve got two, maybe three (month-to-month memories of that time fail me) of my sets of ear piercings. Two years from this point, I would have my neck draped with about six necklaces daily. I wore enough rings to qualify as permanent brass knuckles.

I warded myself and branded myself with all that metal and twine. I wanted to declare my loves, and my allegiances, and my protections. I wanted to be seen and understood. I wanted, with all the terror of being fifteen and lonely, to show the world my heart and have them covet it. The spikes, in retrospect, were hardly adequate protection for that.

Joyce, you half-feral stray, you’ll learn. You don’t know it yet, but you’re going to find bigger stages and louder microphones as time passes. There will be value in showing your heart to strangers through elaborate codes, and symbols, and outright rooftop screaming. (It’s called storytelling, and also the internet. You’ll like them both.)

That, after half a lifetime, remains true.