I’ve been learning and relearning Japanese for 12 years, but this time, I’m working out a system to maximize and speed up my success.

I studied Japanese formally for two years in college, but I had been trying to teach myself for years before that point. In the years since, I’ve made some half-hearted attempts to brush up my skills. If pressed, I can actually produce more Japanese than I give myself credit for. I lack confidence in the language, though, and my knowledge brings new and pathetic definitions to the word “spotty.” I’ve decided to really make a go of it again. My hope is that I’m a little smarter these days. The key here is knowing my goals.

In the past, I just knew I wanted to learn Japanese. Like, all of it. That was it, really. Just know stuff. It wasn’t that I really wanted to live and work in Japan. The level of visiting that I would actually want to experience could easily be conducted with only English. So it wasn’t that. I was also convinced that I would never want to teach English over there, just because I never wanted to teach anything at all. I am less convinced on this bit now, but at the time, I ruled that out. Also, I’m not the most outgoing person in the world (wild animals are often more confident and sociable than I am), so it wasn’t like I had a burning desire to go out and have lots of conversations in Japanese.

So why did I want to learn? It should have been obvious to me, considering how I got involved with Japanese culture in the first place.

My first exposure to Japan was through dubbed animation–yes, Sailor Moon, the starting point of so many in my generation. I didn’t know at the time, though, that it came from Japan. Fast forward to my teenage years. Pokemon hit America like a cute and fuzzy mallet to the temple. I watched the show. I collected the cards. I received my first-ever video game. (My deep and abiding love for Pokemon should probably be saved for a whole other post.)

I met, as a consequence of this, the girl who would become my best friend. She added Magic Knight Rayearth, Gundam Wing, Fushigi Yugi, and Yu Yu Hakusho to my world. I collected manga at Kinokuniya. I spent really appalling amounts of money on imported CDs because, holy crap, Dir En Grey happened and broke my brain. Japanese dictionaries started to multiply in the dark corners of my backpack until they spilled over into a second bag, all their own, that I carted around with me. Studio Ghibli films invaded my unconscious mind with talking cats and floating islands and flying girls (oh, no, those things never crop up in my work, not at all). I started attending anime conventions with my mother, the first step in rebuilding our once broken relationship.

Japan remade my life and never even knew it.

It’s taken me all this time to consciously understand this root of my love for Japan. I want to consume. This is not a highly intellectual pursuit for me. I just want to read and watch and hear more of the stuff that meant so much to me when I was a stupid, messed up teenager trying to survive high school. I understand now that this isn’t about employment opportunities, which was so much the focus of my formal education. Learn Japanese and you can make money. Be useful. All I really wanted, though, was to open up a whole market where I could take in more stories. More ideas. And yes, more people with cat ears, because dammit, that stuff is FUN.

My goals finally match that existing passion. My ultimate goal is to read Haruki Murakami’s Wind-Up Bird Chronicles (ねじまき鳥クロニクル) in the original Japanese. This is a suitably ambitious goal–the book is intense even in English. I’ll have to really work to make this happen. Along the way, my smaller goals are to read the Yu Yu Hakusho manga I collected over the years and to watch a Japanese language movie and understand the story on the first try, without subtitles. My beginning goal is to read and understand children’s stories, like the cute fox story I have been hoarding. (Never getting rid of anything comes in handy, sometimes, even if it does mean there’s no room in my house for people.)

How am I going to get there? I’m doing this on the cheap and from home. Partly, this is because I lack the funds to take any more courses or buy expensive learning software. Partly, this is because I want to build a learning system that focuses on my individual goals and interests. To start with, I have all the books I’ve collected over the years, including old coursebooks: 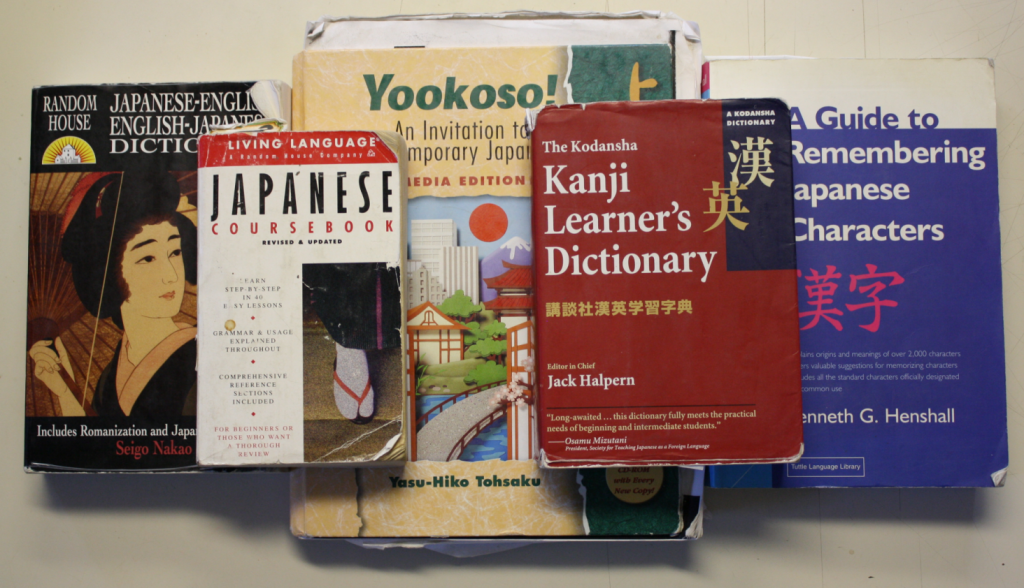 I also have access to some more materials from my public library. Though slightly outdated, I have found some that look useful: 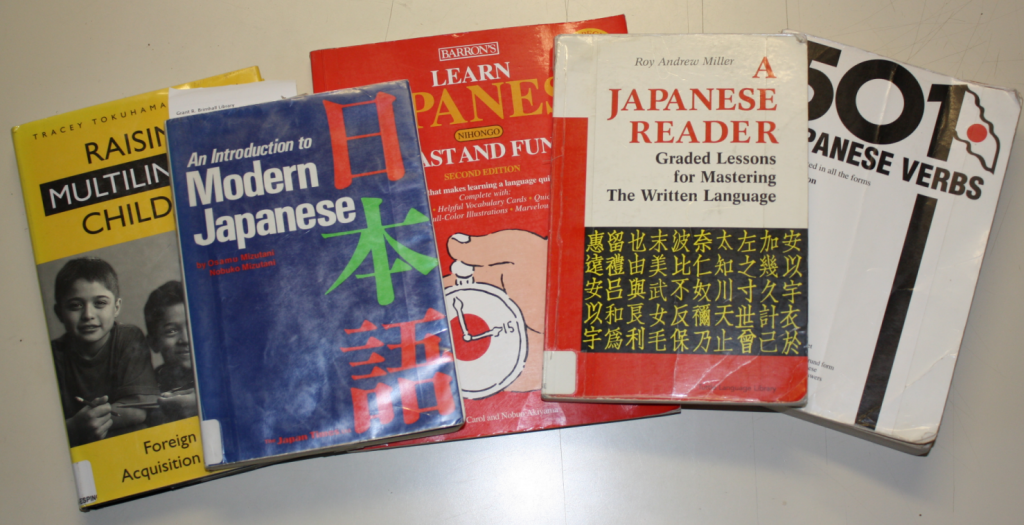 I’m also researching language learning in general, to better understand what our brains do when we learn languages. So far, the best resource I’ve found is Fluent in 3 Months, which has exactly the kind of lunatic enthusiasm I want to capture.

Through Fi3M, I found Anki, which is a flashcard system that lets you determine how often terminology is reviewed. This is great for me, since regular review is not something I’m good at remembering to do and I tend to think I know something better than I really do. I’ve got a few sites lined up for reading practice, like this one on Japanese folk tales for children. I’m also going to try out Slime Forest.

Learning kanji is definitely my main focus and I’m going to let everything else evolve out of that. I have to learn vocabulary to be able to speak, but whenever possible I want that to come from learning kanji. This is an odd approach, perhaps, and maybe not what would be recommended. However, I’m planning this with the understanding that I really do possess some Japanese knowledge–this isn’t my ground level introduction to the language. Kanji also has the special ability to convey some meaning even when you aren’t previously familiar with the word, so guessing becomes more of a viable option.

I don’t know if this tactic is going to work. All I can do is try it and see what happens.

I’ll post follow-ups here as I rework or refine my approach, with an emphasis on figuring out new, unorthodox ways of learning languages. I’m still working out some ideas on progress reports, but I definitely want to use my new-found powers of Japanese to make something interesting. The second key to this project, after knowing my goals, is holding myself accountable. There is no teacher hovering over my shoulder to give me bad mark if I don’t do the homework or pass the test. There’s just me. That has to be enough.

Finally, because it would be stupid to write a whole post about learning Japanese without saying something in Japanese:

One reply on “(Re)Learning Japanese”