When I finally knew for sure where I would be moving to, I started looking into Local Stuff. Restaurants and grocery stores and movie theaters and museums. If you’re on the mailing list, you’ll know how I feel about museums. (Just imagine me with heart eyes and a misty filter and animated glitter on the edges of the frame. That’s how I feel about museums.) So when I have a chance to go to an air and automotive show at a museum, yeah, I’m there.

Which is how I ended up with a slight sunburn, brain freeze from a shave ice, and a whole stack of research books. 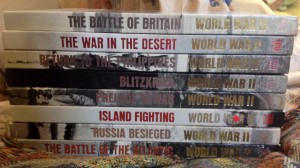 They’re second hand from the museum library’s collection of duplicate books. They only wanted a small donation for a whole set. It’s eight Time Life books from 1977, with titles like “The Battle of Britain” and “Russia Besieged,” and I’m in love.

WWII history is my secret passion. I grew up with the occasional story from grandparents about coastlines without a single light at night and about sailors who had battleships blown out from under them. Mostly, though, it was the Pacific theater and I could never quite cope with the politics of it. The internment of Japanese-Americans makes smoke come out my ears when I think about it. Having virulently racist grandparents telling these stories did not help. So it was always safer to focus on the European front. My love of the home front stories, though, keeps dragging me back to those ugly social politics. This is what I get for taking a special interest in war, of all things.

Someday, I’m going to feel confident enough in my knowledge base to start writing historicals. I’ve got a few ideas rattling around, of course, but I haven’t gotten up the guts to do anything about it. My experience is in writing either the mostly-right-now or the never-happened-at-all. Those are easy. Historicals, though? How can I ever sink deep enough to feel ready? It’s the perfectionist in me and maybe it’s just that someday, I’ll want to write badly enough that I’ll say to hell with one more day of research.

For now, I’ve got Pandora serenading me with Benny Goodman and Glenn Miller. I’ve got the rumble of engines and the whirr of props still in my ears. I’ve got the smell of old books and the dusty feel of paper and the gleam of restored chrome. For now, I’ll spend another day letting half-forgotten slang and tales of heroism burrow under my skin. For now, I’ll give my heart to history.

We use cookies to ensure that we give you the best experience on our website. If you continue to use this site we will assume that you are happy with it.OkNoRead more