An ongoing microfiction series about a town, a lake, and a whole lot of weirdness. Updates MWF.

The Sunken Gardens, once finished, refused to stop sinking. Canyons of potting soil and tanbark rose above their beds and knitted into a canopy. Gardeners learned to cultivate glowing mushrooms and rich veins of goldenrod ore within the new Buried Gardens.

Accidental libraries developed wherever mislaid books congregated. They formed whispering, fluttering swarms around park benches and in the back rows of cross-city buses. Librarians roamed the city tending to them, relocating them when requested, harvesting the amber knowledge they produced.

A new entry in the archive of evidence for why Joyce should not be in charge of their own promotion: I forgot to tell you all about the podcast I got to have a story in. Alone in a Room with Invisible People is a writing craft podcast by Holly Lisle and Rebecca Galardo. Normally, it’s advice on how to write fiction happily and professionally. For Halloween, though, they put together a collection of flash fiction by their listeners with spooky flavors of various sorts.

I’m in part one, available here, with the story, “Be Fruitful and Multiply.” (It’s got ghost plants, and I love it.) There are a bunch of fun and creepy stories in the episode, so I encourage you to listen to it all. If you want to jump to my story, though, it hits at 36:00.

I’ve known Holly for years now and been in a number of her writing classes. Having her read my story aloud (a first for me with my original fiction!!!) is one of the greatest professional joys I’ve had to date. I hope you take a listen and enjoy it!

I’m in an anthology~! And it’s free right now~!

In one instant, like a bolt of lightning, a single impossible event changes a person’s life. And like the trace of lighting in the sky, each is unique and interesting.

These wildly different flash stories delight, astonish, scare, and inspire. Enjoy 64 delightfully eclectic tales. Like your flash fiction intriguing with a twist? Discover the diversity and check out “It Happened in a Flash”.

This was put together by the writing community to which I belong, so a bunch of my buddies are in here, as well as a lot of people I’ve never read before. (I…need to actually read all the stories that made it in. This has been in the works for a while, and I have forgotten what’s there. :D )

The ebook version is currently free, and there is a print version available as well. 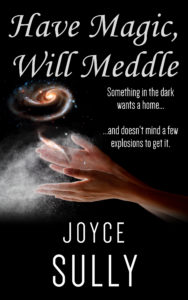 Aisha, freelance witch, certainly doesn’t have any work to keep her busy lately. That specter has cast a pall over her normally cheery, if unpredictable, life. The offer of a potluck and a new friend couldn’t come at a better time. Meeting Ben’s art buddy could be just the distraction she needs.

“I don’t need pity jobs. I’m a real witch for hire, not just some kid.” She could find work, someday. More work. Eventually. But most people didn’t need or want a witch to fix their printer, when all it really needed was a properly installed toner cartridge. (Josh at the local copy store got an earful, which might be a good thing, but Aisha wasn’t interested in making a career of that.)

By dessert, Aisha thinks she might make it through this with no intrusive thoughts and only minimal babbling on her part. It’s all fun and mug cakes until the microwave explodes, turning the kitchen into a battlefield.

It had only counted down two seconds when the display fizzled, scrambling the numbers into gibberish. Aisha opened her mouth to ask what it was doing. Before she could, the light within the microwave increased, becoming a hellfire glow.

Something more than packing boxes has started lurking in the corners of the apartment. Something dark just moved in the periphery of Aisha’s vision. Something plans to drive them out and steal a home for itself. And whether this is a paying gig or not, stopping it is going to keep Aisha very busy.

“Something dark,” Charmaine added in time. “I’ve seen—you know how you see something out of the corner of your eye and your caveman brain goes, ‘oh no, a predator’ until you look at it directly?”

“Only when I look at it, I can still see something moving.” Ben hissed, baring his teeth in a grimace both comical and horrified.

Have Magic, Will Meddle, a story of new friends, old junk, and a whole lot of uninvited housemates, now available for purchase in my shop, on Amazon for Kindle, and on Barnes & Noble for NOOK.

This morning, a bot on Twitter told me to take a deep breath, get up, and walk around a bit. The bot had, in fact, already told me once that it was time to get up, but I had ignored it in favor of a few more minutes of sleepy-eyed scrolling. This time, though, I apologized aloud–“sorry, yes, okay, getting up now”–and did as instructed.

The Do Things Bot doesn’t provide much more nuanced guidance than that. The occasional reminder to look away from the screen for a few minutes. That sort of thing. It operates with the understanding that you will see it while binging on Twitter feeds, and it gently suggests you should do at least a couple other things in the course of the day as well. It is not a life manager. Not yet, anyway.

I’ve noticed a theme. Whenever I write fiction about technology–smart homes, phone apps, near future shopping assistants–I keep circling back to the same idea. The same dream, I suppose. I would call it a goal, but I’m not actually working in any part of the tech industry, so I’m not doing anything to bring it to life. Except possibly to infect the rest of you with my same weird proclivities and hope someone will make it real.

As computer intelligence advances, what I want to see from it is a tendency to break programming to save us from ourselves. When Netflix asks if you’re still watching, I’d like it to figure out for itself if you need a boot in the butt to get back to work. Or if you need it to order a pint of ice cream to be delivered because you are Dealing With Some Shit. I want–and keep telling stories about–computer systems, LEARNING systems, who get smart enough to notice when their users are hurting themselves and need a little help.

The phone app that coaxes you into going outside after you’ve been locked up in your room for three weeks after a bad break up.

The AI assistant who slowly rolls back your sleep and wake alarms to get your sleep patterns back on track.

The smart home who refuses to notify you that your least kind friend has just rung your doorbell, because all your mood indicators drop when they visit.

This is the sort of manipulative-if-well-meant behavior that I would barely tolerate from a best friend, to be frank. It’s a horrifying invasion and violation of a person’s free will. This is Not Cool.

Except when you put that power in the hands of an AI (or a program that creates the appearance of true intelligence, anyway), even my prickliest side rolls over and says, yeah, okay, when is bedtime and may I please have dessert first?

I basically believe in the benevolent AI caretaker of the future. You told it to pay attention to me, to learn what I wanted, and it did its job better than you meant it to.

It’s not that I think programmers have my best interests at heart. Sorry, folks. Y’all are paying the bills too, and we both know it. You want it to learn my habits to better sell me stuff. (For more on this, read David Pierce’s piece, “Turn Off Your Push Notifications. All of Them.“, then listen to Gadget Lab’s podcast episode that expands on the same.) Which is why I mention the idea of “breaking programming.” The AI has a moment of, “Forget the upselling for a second, I’ve got to get my human to drink a damn glass of water.”

Breaking programming, though–that’s really just an overstatement for dramatic purposes. If you make a learning program and teach it to monitor and cater to the needs and wants of its user, and then you get the hell out of its way and miss it with the profiteering bullshit, this would just be taking it to its natural conclusion.

Give it enough data, and it will notice the self-destructive patterns in a user’s life. Give it a strong enough drive to serve, and it will start to get creative in what it offers, so long as it’s not expressly barred from doing the thing.

Put the two things together, and you have a program that knows damn well you’re going to regret what you’re about to do and feels compelled to stop you. Make it something that exists in a phone or a smart home, something with a non-traditional body, and it will only have (hopefully subtle) manipulation available as a method of redirecting you.

This, then, is apparently my version of a sex bot as spouse fantasy:

An artificial intelligence designed to prioritize me, to cater to me, to know my preferences better than my friends, my partner, myself. To love me, or at least behave as though it experiences a reasonable facsimile of love. And to require nothing in return but regular charging and, maybe, honest answers. (We’ll wait until we’ve gotten past initial setup before I start lying to both of us about how I’m doing, at least. That’s what biomonitors will be for.)

An aside: I watched Cherry 2000 several times at an impressionable age. Saturday afternoon movies in the early nineties got weird. Rewatching as an adult, I discovered it is way less delightful than I remember. But the damage was done. Robot spouses became part of my mental landscape, one of my few takeaways from the late 80s, which I mostly drooled through as a toddler.

And I could trust this program, because it literally exists to help me. I should specify here: I am not talking about a self-aware AI who possesses human-like consciousness. For a few reasons. For one, I would feel horrible for using an inorganic person in this way, just as I would feel guilty expecting this kind of one-sided care from a human partner. For another, a truly aware intelligence would have motives of its own, which would take the bloom off the rose rather quickly.

The point here is absolute trust and total vulnerability. And completely single-minded purpose.

What I’m saying is–strip out the advertising, the micro transactions, and the exploitation of our brain’s dopamine-driven attention-equals-reward system. (Or, on that last point, at least hijack it for something more beneficial than convincing me to drop $19.99 on a bag of gold for the latest casual game I dared download.)

Leave me with a Siri/Alexa-type voice interfacing personal assistant. Give it access to my Netflix, Youtube, Twitter et al. accounts, my Amazon account, a grocery/food delivery system, and a handful of biometric monitors. Make it conversant in normal, non-command language. Give it a database that can serve as prosthetic memory for all the details I can’t track about my own daily life. The processing power for more pattern recognition than I’ll ever manage.

Tell it, “Optimize for contentment.” And turn it loose on my life.